The chapel where Adam and all is family prayed for us.

Riding in the car with my mom later in the week, she accidentally pulled out in front of another car and quickly pulled into another lane, she asked jokingly,

“Did you just see your life flash before your eyes?”

I responded with, “Not more than any other day this week.”

Let’s rewind to Monday. After my flurry of phone calls while at Cracker Barrel, a breast surgeon from our second opinion hospital was able to get us in that Monday afternoon. We looked up the surgeon that the office told us we would be meeting. She was board certified with years of experience and a recipient of several excellence awards. Perfect.

Well, not perfect. We get to the office to check in, and the place is empty. I tell the receptionist the name of the surgeon I am supposed to be meeting with, and she shakes her head and says I am meeting with a completely different surgeon.

She makes a Vanna White gesture with her hand pointing to a brochure that says, “New to our practice! NOW ACCEPTING PATIENTS!” Hmm…ok. That’s fine. I know everyone is new at some point in their career, but I also know that I am not your run of the mill breast case. (The sizeable pregnant belly gave that away.)

They called us (Jordan, my mom, and me) back to have an ultrasound so the surgeon could look at the mass, followed by the most awkward breast examine I have ever had. After the ultrasound was finished, she took us into a consultation room. She went on to explain that I had a triple negative tumor, which means they don’t know what is driving the growth. It was negative for estrogen, progesterone, and HER2. She also said it was grade 3; the fastest growing.

SIDE NOTE: The surgeon made it sound like these are two separate pieces of bad news. Don’t get me wrong, these aren’t good things, but we found out from my NOW oncologist that these are a double check. If I am triple negative, then it SHOULD be a grade 3 tumor.

The surgeon went on to explain all of the different kinds of mastectomies, lumpectomies, types of incisions and other specific surgical jargon. I pointed to my stomach and asked how this would affect the baby. She said we might not do anything until I am term (7 more weeks!) or they may deliver early. We would have to see a maternal-fetal doctor to find that out. She also told us it would be four weeks after a c-section before I could start chemo and she wasn’t sure how soon they could deliver the baby.

All three of us were tallying up weeks in our head and comparing it with how fast the tumor was growing. Jordan asked her the likelihood of getting all of the cancer out during the surgery, and she said with a shake of her head, “There is no guarantee.” She went on to say she would try to get us in with a geneticist and an oncologist the next couple of weeks.

So we walked out of the consultation with this surgeon, and before we had a chance to discuss it, we all three had basically heard her tell us that my prognosis was not good. I personally thought the surgeon believed I would be dead by the end of the year.

It’s incredible what kind of effect so few words can have on your hope.

In hindsight, we think this surgeon was so new she didn’t feel comfortable saying, “I don’t know the answer to that but let me find out.”

Instead, she left me thinking about how Jordan was going to raise two toddlers and an infant by himself. She left my mom thinking that she would give her and my dad’s burial plots to Jordan and me. And she left my sweet husband in complete shock.

To say this was the most depressing day of my life would be an understatement.

We had no hope.

I knew that everything would work out the way God had already planned but everywhere I looked I saw death,

that Jordan wouldn’t have a wife,

that Reed and Ryanne would cry for me in the middle of the night after I was gone,

and that the tiny baby girl growing in my belly would never have any memories of me.

My brother happened to be in Europe with his family and his wife’s family the week this all transpired. My mom actually told him of the diagnosis during his layover in Philadelphia on their way to Europe. Adam texted me Tuesday morning about 4 am the day we were to meet with the breast surgeon I was supposed to meet originally. I was already up having not slept in over a week. Here was our conversation… 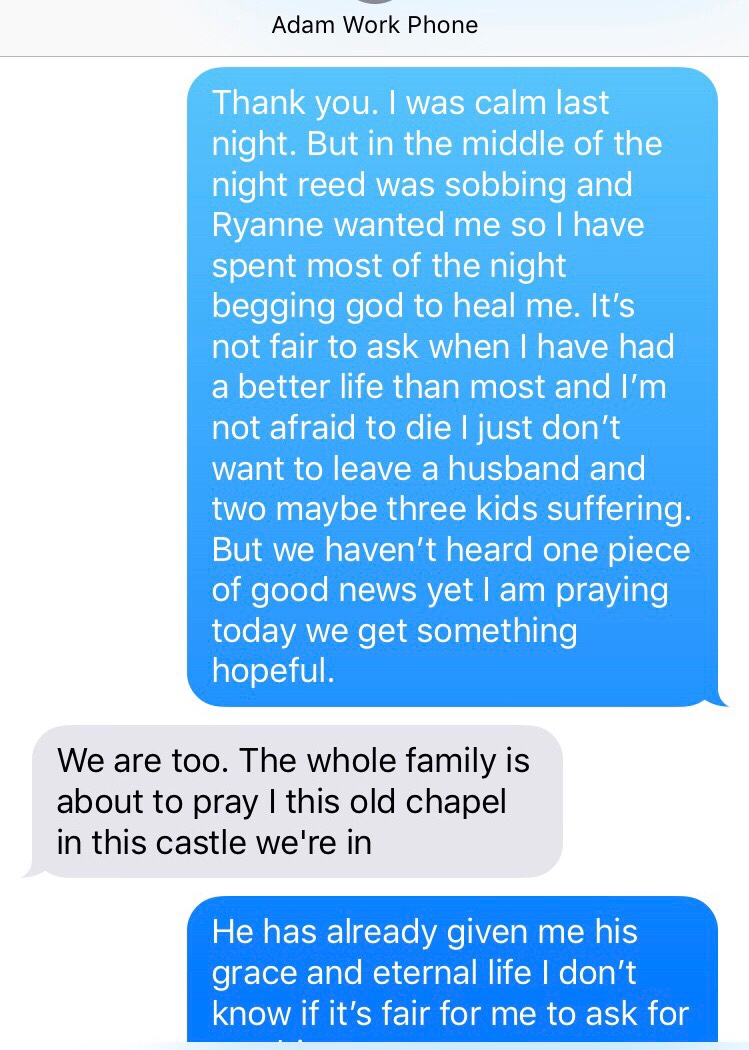 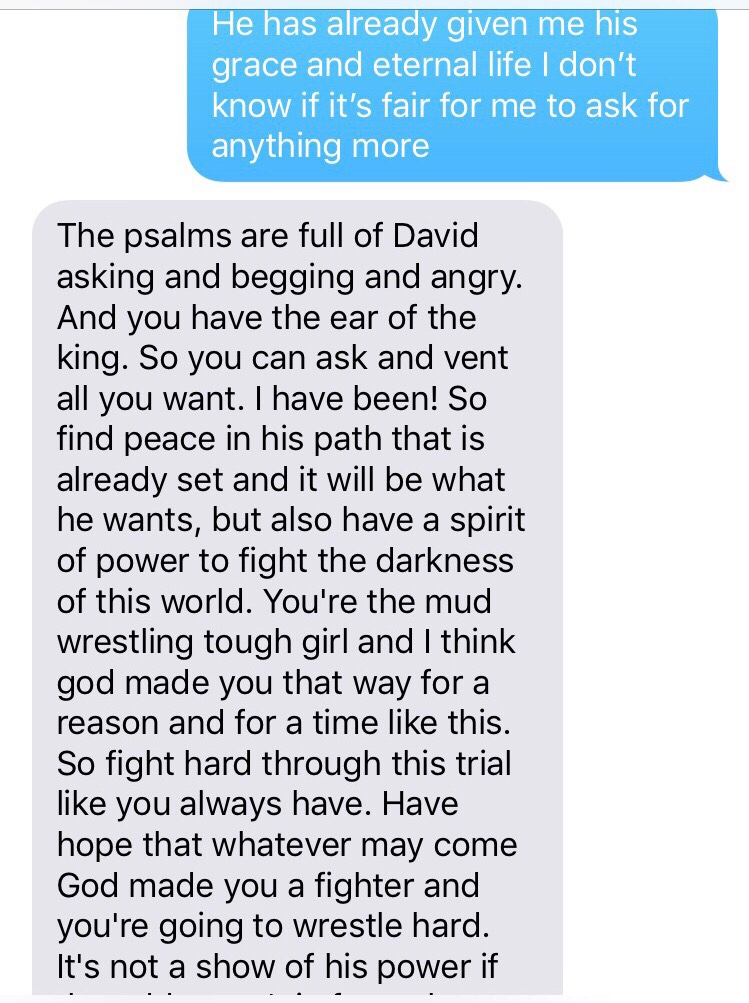 He said it all so perfectly. We have the ear of the King, the creator of the universe wants to hear our cries and answer our prayers. Even if you don’t think you are worthy of healing, forgiveness, grace or God’s love… you are.

Proof that I have mud wrestled (at least a dozen times) and why you should send your children to church camp!

Wife. Mom of 3 babes. Sinner saved by grace. View all posts by jkjustice12